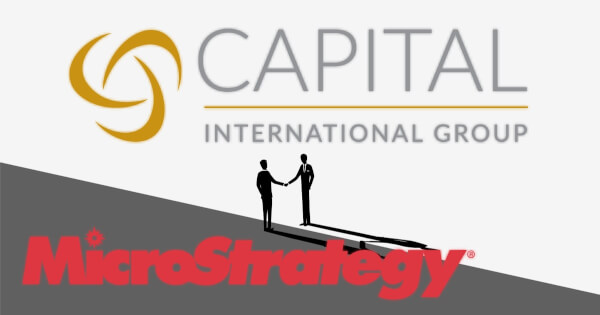 According to a document submitted to the US Securities and Exchange Commission (SEC) on July 12, the paper shows that Capital International Group, a large US asset management company, bought 953,242 shares of MicroStrategy common stock on the Nasdaq exchange in the United States, which is worth about 560 million USD at the current prices.

Capital International Group mainly provides financial services for family offices, wealth management institutions, pension trustees and so forth. The group now owns 12.25% of the shares and has leapt to the third-largest shareholder in Microstrategy after the Chairman & CEO Michael Saylor and Blackrock Inc.

Although the capital group has not yet expressed an opinion on Bitcoin or cryptocurrency, acquiring a 12% stake in MicroStrategy’s investment indicates that Capital International Group may actively join the digital asset management track to provide its customers with more diverse investment services.

Microstrategy code-named MSTR has a total of 7,782,568 shares outstanding in the market. This leading American business intelligence firm is not relenting in its quest of purchasing more Bitcoin. As reported by blockchain news in June, MicroStrategy acquired an extra 13,005 Bitcoins. Microstrategy currently is the company that owns the most bitcoin in the world by over 111,000 BTC.